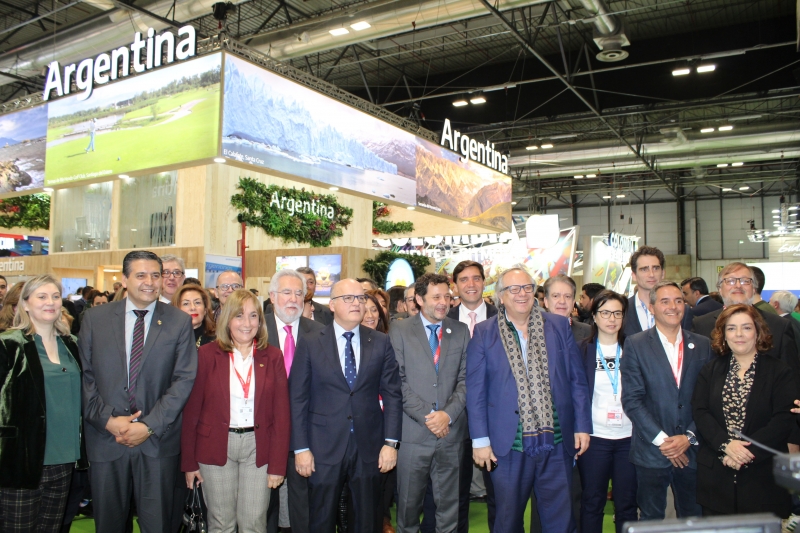 FITUR- Madrid, 01/23/2020.- Termatalia starts in FITUR the promotion in Europe of its fifth edition in Latin America. The choice of Entre Ríos as headquarters is determined by the fact that it is the province of Argentina with the largest number of thermal establishments, a total of 16, spread across 14 locations. Not surprisingly, Entre Ríos was declared by Law in 2015 as the “National Capital of Thermal Circuits”.
The official launch of Termatalia Entre Ríos - Argentina 2020 took place this morning at the Argentina stand at the Madrid International Tourism Fair (FITUR) in an act in which the Secretary General of the Institute of Tourism Promotion of the Republic acted as host Argentina (INPROTUR) and great connoisseur and promoter of Termatalia, Ricardo Sosa, who encouraged the Argentine provinces and companies in the sector to actively participate in Termatalia, "the great forum of knowledge and contacts of the world of thermalism worldwide". The President of the Provincial Council of Ourense, of the E.H.T.T.A. participated in this presentation. and of the advisory committee of Termatalia, Manuel Baltar; of the Secretary of Tourism of the Government of Entre Ríos, Gastón Irazusta; of the president of FEHGRA, Graciela Fresno; of the president of Spas of Spain and the Institute for Tourism Quality (ICTE), Miguel Mirones; from the territorial delegate of the Xunta de Galicia in Ourense, Marisol Díaz and from the councilor of Termalismo de Ourense, Flora Moure. This act was presented by the director of Termatalia, Emma González.
The 20th edition of this event will be held between September 17 and 18, 2020 and will convene professionals from more than 25 countries that will ratify its role as a thermal bridge between Europe and Latin America, gradually incorporating new markets in the Middle East and Pacific Asia. As usual, the scientific and academic program of this event will begin a day earlier, on September 16, with the International Meeting on Water and Thermalism that will be celebrating its 15th edition. There will also be postures to know the thermal centers of the province.
The professionalization of the sector, both tourism and industrial and business level will continue to occupy a prominent place in the fair through the Tourism Contracting Exchange between tour operators and tourist establishments, Suppliers of equipment goods and potential importers from various countries, drinking water packaged and distributors as well as professional visitors from about thirty countries.
Entre Ríos
Entre Ríos, headquarters of Termatalia Argentina 2020, is a province whose main economic resources are closely linked to thermalism. Due to the strategic position it occupies / very close to the capital of the country, bordering with Uruguay and close to Brazil), it becomes an accessible destination for Latin America and very attractive for other countries on other continents who want to participate as exhibitors or visitors to Termatalia Argentina 2020. The celebration of the fair in Entre Ríos will also serve to reinforce the presence of Argentina in Termatalia and to promote through it Ourense and Galicia as thermal destinations, taking into account data such as Argentina being the main issuing market of tourists to Spain in Latin America.
The province of Entre Ríos, located in the Argentine Coastal Tourism Region, concentrates the largest number of thermal destinations in the Country, and was declared by National Law of 2015 as the “National Capital of Thermal Circuits”. With 14 locations and a total of 16 complexes that offer more than 125 pools with hot springs of different characteristics and properties.

Argentina in TermataliaArgentina was the first country in Latin America to rely on Termatalia to position itself as an international thermal destination. With continued presence since 2006, this country has progressively increased its presence at the fair, both at the country level through the Ministry of Tourism itself and INPROTUR, and at the private level, through the continuous presence and cooperation of the Federation Gastronomic Hotel Manager of the Argentine Republic, FEHGRA, one of the main strategic partners of Termatalia.
It also highlights the presence of the province of Santiago del Estero that became the venue for the 2014 Termatalia Argentina edition and that has continued to be closely linked to the project it uses as a tool to promote its thermal and tourist resources internationally. For its part, the province of Entre Ríos has had an outstanding presence in the last editions of the fair, both in those held in Europe and in Latin America. In Brazil 2018 they presented their candidacy officially and in the last edition they collected the witness to organize the 2020.
International promotionTo add exhibitors and professionals, Termatalia Entre Ríos-Argentina 2020 starts at FITUR an intense international promotion campaign that will take it in the coming months will be present in the main world tourism and thermal tourism forums such as the ITB in Berlin, the BTL in Lisbon or the Annual Congress of the European Association of Spas (ESPA), in addition to promotional and academic actions in Latin American countries.