Manuel Baltar, president of the advisory committee of Termatalia 2019 and of the Diputación Provincial de Ourense, has been elected as the new president of the European Association of Historic Cities with Thermal Heritage, EHTTA, the most important European thermal network composed of 51 thermal areas of 20 countries The election took place unanimously during the assembly of the association held yesterday in Brussels.

Manuel Baltar thanked the confidence deposited in his candidacy and said he felt "satisfied and happy" after knowing the unanimous election by the members of the executive committee, "meeting that I could not attend because of the celebration, today (yesterday) in Ourense, of the last plenary session of the Diputación of the mandate 2015-2019 ", and emphasized:" I cannot stop showing my responsibility with this new competence in the leadership of the historic thermal cities of Europe, without a doubt, the most important thermal organization of the world, "stressing that this unanimity in the election" is produced by members of twenty nations that belong to different political colors, that is the greatness of the agreement, dialogue and agreement, and with Ourense present. "

In this new stage of the Association of Thermal Historical Cities of Europe accompany in the directive team to President Baltar, like vice-presidents Eric Brut, of France, and Lorenzo Lucchini, of Italy, a period in which Manuel Baltar is marked like objective "to emphasize the importance of thermalism in the construction of our European identity and raise the awareness of community institutions and political groups in the European Parliament about the need to implement and support thermal policies, as well as to promote thermal spas in Europe "as economic dynamisers, all in the most rural areas. "

Manuel Baltar is a firm defender of thermalism "as an element of cohesion" and a "determining factor for rural development". Its tourist potential and its social, cultural, environmental and health values ​​"make it perfect for the leading tourism revolution of the 21st century in Europe, where the visitor, in addition to leisure, seeks emotions and sensations, which the spa has unique way and with the highest quality, "says Manuel Baltar.

The newly elected president of EHTTA is a great connoisseur and defender of Termatalia, International Fair of Thermal Tourism, Health and Welfare, which has led him to be appointed as chairman of the advisory committee of this meeting which he described as "an authentic UN Thermal. " The next edition will take place between September 17 and 21.


EHTTA
The historic thermal cities of Europe, all born around its kind springs of mineral-medicinal water, have been for centuries places of health, well-being, culture and tourism, and its development over time has left us a rich thermal architecture of great beauty . Places like Vichy, Baden-Baden or Karlovy Vary are recognized thermal destinations all over the world, but in Europe there are many cities that share with them a unique urban personality and a unique thermal architecture.

EHTTA founding members, brings together 51 small town spread across 20 countries, a melting pot of stories, monuments, culture and thermal water that the route is responsible for promoting and protecting, stimulating their sustainable tourism development. It is an international non-profit association that works for the recognition of cultural value and the potential for innovation that these thermal cities have.


The EHTTA contributes to the economic development of the thermal cities and to the safeguarding of their cultural and architectural heritage, promoting the exchange of experiences and good practices at a European level. 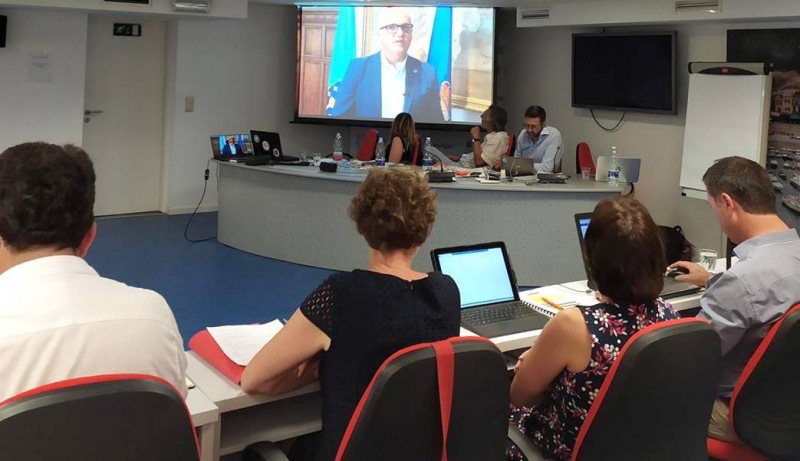